Bring ReactIntersectionObserver over today, your React children will love it!

React Intersection Observer is a React component, acting as a wrapper for the IntersectionObserver API. It is fully declarative and takes care of all the imperative parts for you.

React Intersection Observer is good at:

Please make sure you have the minimum node version installed (as defined in the package.json)

Otherwise you run into this build error:

Optionally add the polyfill and make sure it's required on your dependendencies for unsupporting browsers:

What does IntersectionObserver do?

IntersectionObservers calculate how much of a target element overlaps (or "intersects with") the visible portion of a page, also known as the browser's "viewport": 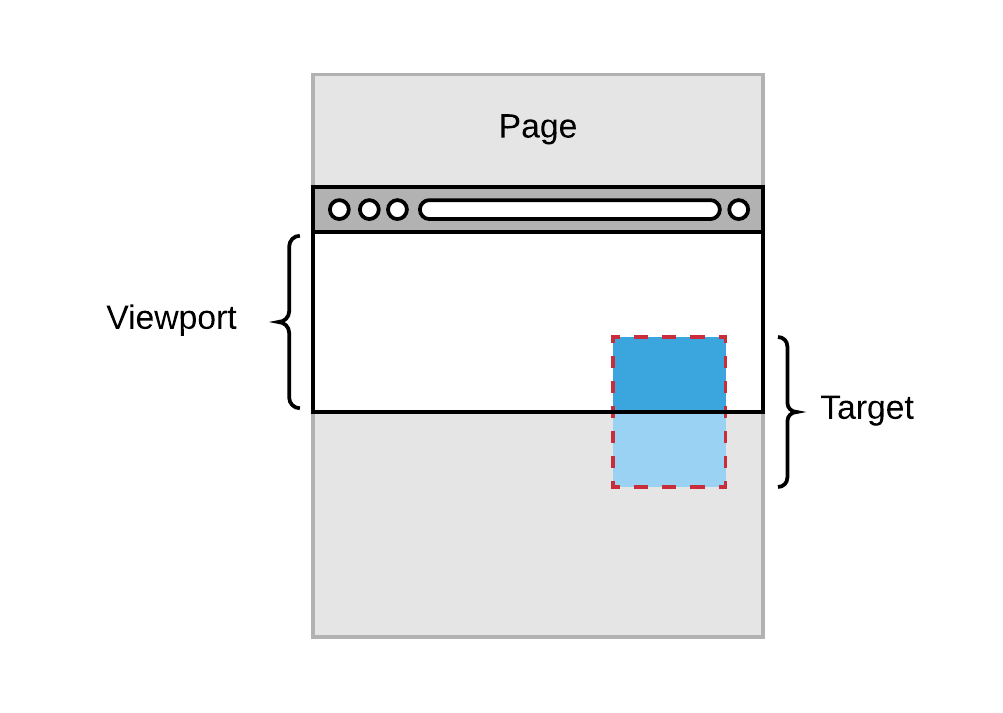 Why use this component?

The motivation is to provide the easiest possible solution for observing elements that enter the viewport on your React codebase. It's fully declarative and all complexity is abstracted away, focusing on reusability, and low memory consumption.

It's built with compatibility in mind, adhering 100% to the native API implementation and DSL, but takes care of all the bookkeeping work for you.

Instances and nodes are managed internally so that any changes to the passed options or tree root reconciliation cleans up and re-observes nodes on-demand to avoid any unexpected memory leaks.

ReactIntersectionObserver does not create any extra DOM elements, it attaches to the only child you'll provide to it. This is done using findDOMNode to retrieve the first DOM node found. If your child already has an existing ref, either a callback or object (from createRef), these will be handled normally in either case.

When using ReactIntersectionObserver the only required prop is the onChange function. Any changes to the visibility of the element will invoke this callback, just like in the native API - you’ll receive one IntersectionObserverEntry argument per change. This gives you an ideal and flexible base to build upon.

Some of the things you may want to use ReactIntersectionObserver for:

Recipes are useful code snippets solutions to common problems, for example, how to use ReactIntersectionObserver within a Higher Order Component.
Here's how to create an element monitoring component:

In cases where there isn't a DOM node available to observe when rendering, you'll be seeing an error logged in the console:

This somewhat helpful and descriptive message is supposed to help you identify potential problems implementing observers early on. If you miss the exception for some reason and ends up in production (prone to happen with dynamic children), the entire tree will unmount so be sensible about placing your error boundaries.

Ultimately the way to avoid this is to either make sure you are rendering a DOM node inside your <Observer>, or to disable the observer until there's one <Observer disabled>.

The element or selector string that is used as the viewport for checking visibility of the target.

Indicates at what percentage of the target's visibility the observer's callback should be executed. If you only want to detect when visibility passes the 50% mark, you can use a value of 0.5. If you want the callback run every time visibility passes another 25%, you would specify the array [0, 0.25, 0.5, 0.75, 1].

Controls whether the element should stop being observed by its IntersectionObserver instance. Useful for temporarily disabling the observing mechanism and restoring it later.

Function that will be invoked whenever an observer's callback contains this target in its changes.

Single React component or element that is used as the target (observable). As of v1.0.0, children can be null. Null children won't be observed.

When needing the full spec's support, we highly recommend using the IntersectionObserver polyfill.

Earlier preview versions of Edge and prior to version 58 of Chrome, the support for isIntersecting was lacking. This property was added to the spec later and both teams where unable to implement it earlier.

As the above-mentioned polyfill doesn't perform callback invocation asynchronously, you might want to decorate your onChange callback with a requestIdleCallback or setTimeout call to avoid a potential performance degradation:

Out of the box

Before you do, please read our Code of Conduct so you know what we expect when you contribute to our projects.

Our Contributing Guide tells you about our development process and what we're looking for, gives you instructions on how to issue bugs and suggest features, and explains how you can build and test your changes.

Haven't contributed to an open source project before? No problem! Contributing Guide has you covered as well.